Posted on July 3, 2013 by Channel Marketer Report in Channel News 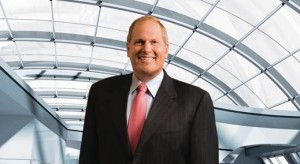 Dave Cote, Chairman and CEO of Honeywell, has been chosen as the CEO of the Year by Chief Executive Magazine. The award winner is nominated by magazine readers and selected by a committee comprised of Global CEOs.

The award recognizes Cote’s leadership during his 10-year tenure at Honeywell. Since he became CEO, Honeywell has “increased sales by 71% to $37.7 billion, pro forma EPS1 by 197% to $4.48, and delivered a total shareowner return of 240%, consistently outperforming the S&P 500 during that timeframe,” according to a company press release.

“I’m proud of Honeywell’s performance and the terrific returns we’ve provided our shareowners,” said Cote. “We’ve transformed Honeywell into a global growth company, led by common initiatives, behaviors, and processes. Our ‘One Honeywell’ culture has been a powerful piece of our growth story because people are our ultimate differentiator. Our portfolio has evolved from a largely manufacturing base to today where half of our business comes from software development. Our focus on seed planting and re-investing in our businesses, products, and services will continue because it’s working.”

Today, Honeywell is global: 54% of sales come from outside the U.S., up from 41% in 2003. During that time, the company also has completed 75 acquisitions and 50 divestitures.

In other news, President Obama has appointed Cote to serve on both the bipartisan National Commission on Fiscal Responsibility and Reform (commonly known as the Simpson-Bowles Commission) and the U.S.-India CEO Forum. Cote also has served as a Steering Committee member of the Campaign to Fix the Debt.