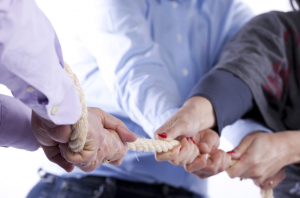 In fact, approximately two-thirds of channel firms had reported losing between one and nine deals due to channel conflict during 2012, according to research from CompTIA.

The Channel Conflict & Deal Registration Study, which collected insights from 400 IT solution providers, also indicated that channel conflict has either somewhat increased (29%) or increased significantly (21%). In addition, the majority of respondents (80%) said channel conflict had some kind of impact on their business.

However, there are many ways channel conflict can occur, which makes channel relationships and overall dynamic far more complicated.

“We’re seeing channel conflict increase in a variety of ways,” said Carolyn April, Director of Industry Analysis for CompTIA in a recent webinar. “Vendors are not honoring deal registration. Partners are either having their leads being taken away by direct sales, or vendors are giving them to other partners.”

CompTIA honed in on five types of channel conflict most organizations have experienced in the past two years:

As an organization that generates 100% of its sales through the channel, secure content and threat management solution provider Kaspersky Lab strives to provide the best sales opportunities to partners on a consistent basis.

In July 2012, Kaspersky Lab rolled out changes to the deal registration program to provide partners with more pricing control and margin protection if they bring new opportunities to the table. Regarding the program advancement, Chris Doggett, SVP of Corporate Sales for Kaspersky Lab said: “If a partner is first at bat for an opportunity, it is their opportunity.”

This added deal protection extends across the VAR and LAR partner networks, which has had a profound impact on partner engagement and loyalty, according to Leslie Bois, Director of Channel Sales for North American LAR partners. In fact, establishing these “relationship guidelines” is “something we think and talk about a lot,” Bois said. “Typically, if conflict occurs, there’s a lack of prompt and concise communication. There are issues with deal registration, or overall response times are slower either on the vendor or partner side.”

From a partner perspective, deal registration is top of mind, especially for smaller organizations that are trying to establish themselves in specific markets. For example, deal registration helps Kaspersky partner All Tech 1 “ensure our customers are getting the best deal possible,” according to Bob McMillen, President of All Tech 1.

“Deal registration is something we appreciate as a company,” McMillen told Channel Marketer Report. “Largely because we can guarantee to our customers that we’re giving them the better buy and they don’t have to shop anywhere else. Additionally, we know Kaspersky Lab won’t undercut us on a deal.”

“By forcing this training, it really prevents conflict because the vendor ensures the VAR understands the product better,” McMillen explained. “The advantage for us is that the vendor is giving us a deeper discount on products for training we complete. That form of reward is really warranted because in retrospect, us being educated on products costs the vendor less time and money to deal with us.”

Finally, Kaspersky continues to focus on building relationships and trust among partners, especially via its annual partner conference. This event, McMillen noted, allows All Tech 1 to converge with hundreds of other partners as well as the Kaspersky executive team. “That way, if there’s a problem that needs addressing, Kaspersky is easily accessible. I feel like that makes partners feel better and more confident about their business, which also helps prevent future conflict.”

“These take place for a variety of reasons, many at the front-lines level in the field, one-off instances that the larger vendor organization is not always aware of,” April said in a follow-up interview with Channel Marketer Report. “Enough of these situations, however, and you can say it has pervaded part of that vendor’s go-to-market culture.”

The advent of the cloud and managed services specifically has shaken up how vendors and their partners do business. In fact, while intra-channel competition is common, vendor-to-solution provider conflict is the most prevalent, according to Lawrence Walsh, President and CEO of The 2112 Group, a channel marketing consultancy and research company.

“Vendors have two competing interests: The need to capture new business and make their numbers; and the desire to gain as much share of the customer’s wallet as possible,” Walsh said in an interview with Channel Marketer Report. “As such, vendors will go out of their way to ensure a deal is landed, up to and including taking the deal from the partner for direct relationships, or assigning a deal to a different partner that is perceived to have greater capabilities.”

Majority of the time, vendors set the stage for whether channel conflict will occur. However, once partner trust is compromised, VARs and solution providers are likely to respond one or several ways, according to CompTIA, including:

“Vendors should be concerned that channel partners — when faced with competition from their own vendors — are attempting to sell competitors’ products to the same customer, or are dropping vendors,” April said. “If you’re hearing more complaints about channel conflict, you have to take a look at what’s happening in the field, and make sure you’re not losing partners or those deals.”

The Partner’s Role In Channel Conflict

However, the solution provider community also holds some responsibility in causing conflict, according to Walsh.

“We believe solution providers, in general, need greater independence from their vendors, less reliance on vendors for marketing and lead generation, brand awareness, pre-sales support and implementations,” Walsh said. “If solution providers were more independent, they would likely not have as much conflict issues — at least as they’re defined today.”

In an effort to weather channel conflict, partners are taking the following measures, according to April, including placing greater emphasis on improving their services, and striving to specialize in specific vertical industries. Other actions include shifting to recurring revenue models and simply evaluating potential vendor-partner history of channel conflict. However, to move forward successfully, partners also must revamp their overall marketing and branding efforts to reflect all shifts and changes being made.

“A lot of channel companies traditionally identified themselves as a specific vendor partner, specializing in specific products and services,” April said. “However, with the cloud and a lot of things product-wise behind the scenes, it’s important for channel partners to promote their own identy strongly and have that be what they go-to-market and lead with.

To decrease overall incidents of channel conflict, vendors are implementing deal registration, and making it a core component of channel relationships.

However, there are flaws in some deal registration programs, especially in regards to how vendors and partners collaborate on deals, and the overall lead pass-off process.

As much as 34% of channel firms said that having a set of best practices in place for deal registration across all vendor partners would impact overall channel conflict, according to CompTIA research. Potential best practices include:

Other methods also are being used to alleviate conflict, according to 2112 Group research, including: establishing general rules of engagement; certifications; and tiered benefits based on performance, business planning and co-selling agreements. Of all options, solution providers gave deal registration the highest rating for overall effectiveness.

“Deal registration is seen as the most effective tool in managing channel conflict,” Walsh explained. “However, solution providers say deal registration’s effectiveness is a little better than five on a 10-point scale. Vendors have rules of engagement, processes for reviewing and remediating conflict, and compensating partners who bring net-new deals to the table. Bottom line, though, management of channel conflict is often a function of executive oversight and the vendor’s willingness to play by the rules it establishes.

Alicia Fiorletta is Senior Editor for Channel Marketer Report. Working closely with industry analysts and experts, Alicia reports on the latest news, technologies, case studies and trends coming to forefront in the channel marketing world. With a focus on emerging marketing strategies, including social, mobile and content for demand, Alicia hones in on new ways for organizations to market to and through their partner networks. Through her work with G3 Communications, Alicia also acts as Associate Editor for Retail TouchPoints, a digital publishing network focused on the customer-facing area of the retail industry.

View all posts by Alicia Fiorletta →